My mind is still buzzing from tonight’s event. Teeka thinks we can make 30 years’ worth of gains from holding what he believes will be crypto’s next trillion-dollar coin this year.

But as good as Crypto’s Next Trillion-Dollar Coin could be, Teeka was adamant: We’re on the verge of an even bigger opportunity in crypto.

It’s an opportunity to potentially make CENTURIES worth of gains over the next 12 months.

I’m talking about a monster run in a handful of tiny altcoins tied to the next potential trillion-dollar coin.

Years ago, Teeka identified six coins tied to Bitcoin’s rise to becoming a trillion-dollar coin. As Bitcoin exploded in value, his research said these six coins would explode with Bitcoin. And that’s exactly what happened. His model portfolio saw gains as high as…

And while nothing is certain… 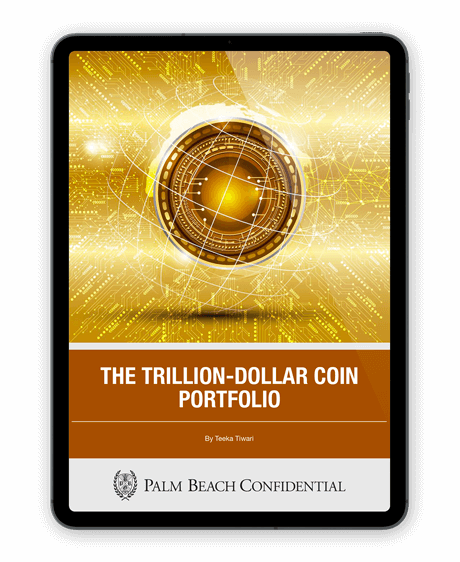 Teeka’s uncovered SIX NEW altcoins linked to the next potential trillion-dollar coin that his research shows could be just as explosive.

He calls this list of six altcoins: The Trillion-Dollar Coin Portfolio.

Now, only Palm Beach Confidential members have access to this list. But there’s good news… As a registrant of Teeka’s event, you can join Teeka tonight at a huge discount.

And that’s not all.

Far from it, in fact.

In other words, you’ll receive two years of Palm Beach Confidential for LESS than the price of one.

Here’s a full recap of your time-sensitive offer.