In July 2019, we were finally emerging from the brutal 2018 Crypto Winter…

Bitcoin had risen over 250% from the start of the year. Institutions were coming back into the market. And demand was skyrocketing.

But altcoins – all coins other than bitcoin – were suffering.

Not only were they not rising along with bitcoin… many were collapsing in price.

Subscribers wrote to me, asking if they should sell their altcoins and go all-in on bitcoin.

At the time, I commented on how it was tempting to do just that. Yet I also counseled patience. I pointed out that, after a crypto bear market, bitcoin always outperforms altcoins.

On average, bitcoin will outshine altcoins for about six months. But after that, the altcoin market catches up. We saw this happen during the 2016 crypto bull run…

Patient investors saw the altcoin market rally over 200% from December 2015 to March 2016. Meanwhile, bitcoin grew at a slower rate during that period.

When I made my initial prediction last July, I expected the next altcoin rally to begin in late 2019. And we did see prices bubble up… just not enough to overtake bitcoin.

Once again, I counseled patience and assured my subscribers altcoins would eventually eclipse bitcoin’s performance.

Investment legend Teeka Tiwari has nailed numerous crypto recommendations over the past few years. Now, he has decided to give away his comprehensive 14-part crypto training course to anyone who wants to claim it.

And that’s exactly what happened in January 2020… 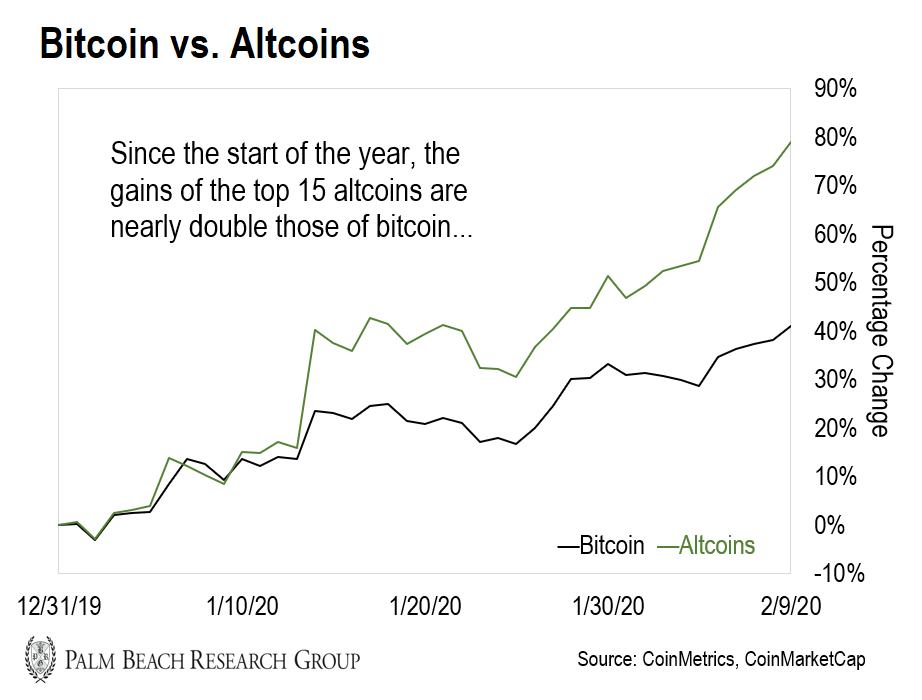 As you can see, the top 15 altcoins have outperformed bitcoin since the start of the year. While bitcoin is up only 41%, the largest altcoins are up 79%.

Looking back at 2016’s altcoin rally… you can see we’re at the very beginning of what will be another massive, wealth-building run.

And it’s already starting to show through the bitcoin dominance rate.

If you’re an altcoin investor, the bitcoin dominance rate is one of the most important metrics in crypto. It’s the percentage of the total crypto market cap that bitcoin takes up.

Today, the bitcoin dominance rate is at about 64%. That’s down from 73% in September 2019. And when bitcoin’s dominance falls, altcoin prices rise…

You see, people start buying into altcoins to pursue higher returns. As a result, the altcoin market size ends up swelling relative to the bitcoin market.

So understanding the bitcoin dominance rate can tip you off to when altcoins are about to take off. And right now, the declining dominance rate suggests altcoins will go significantly higher.

The last time bitcoin dominance dropped like this was in 2017 – and it sparked a massive bull run.

So in the coming months, we’ll see bitcoin dominance continue to drop as hundreds of billions of dollars gush into the altcoin market…

The 5G Master Key – The Biggest Stock Market Story For 2020

We’re Still in the Early Stages

Crypto is already on fire, and the new decade has only just begun.

Over the weekend, bitcoin broke $10,000 for the first time since October 2019 (before pulling back a bit on Monday). And it’s still up 41% since the beginning of the year.

But the top altcoins are up 79% right now. So while my altcoin prediction was a few months premature… it goes to prove an important point…

For years, I’ve told my subscribers to always focus on the primary trend’s trajectory first. Once you know the trajectory of the trend, you can safely jump on board and not be too bothered about perfect timing.

That’s because a massive trend – like the crypto adoption one we’re in right now – will bail you out of bad timing.

It’s just like buying Microsoft or Oracle in the mid-1990s. These stocks saw drops of 25% and 40%, respectively. But the internet trend was so massive that they still could’ve made you millions of dollars in profits.

That’s the power of a massive trend. And that power is at work in the crypto market right now.

I want you to understand: It’s still the very early days in crypto. It’s like buying into tech stocks in 1995.

Sure, there was a lot of volatility then… But you could’ve scooped up names like Microsoft, Oracle, and Qualcomm for split-adjusted prices of $2.42, $1.84, and $1.05, respectively.

Soon, you will need to shred your credit card

A major upheaval is in the works. And, soon, you’ll need to replace your cards with brand new ones

Powered by a hot new technology the World Economic Forum projects will grow 295,762% over the next seven years.

Teeka Tiwari, America’s #1 investor based on audited results, just released a video to reveal the single best way to play this coming change

I want you to know all the pieces are falling into place to create the kind of bull run we haven’t seen since 2017.

In the meantime, institutional demand is picking up just like I told you it would.

And open positions in the Chicago Mercantile Exchange’s (CME) bitcoin futures jumped to a five-month high of $249 million last week – up 34.5% from last month.

This is all incredibly bullish. Plus, this demand doesn’t even account for the 500 million stock investors who can’t buy bitcoin on institutional platforms like Bakkt or CME.

But Wall Street is building on-ramps for these retail clients that’ll make buying crypto as easy as buying stocks. Soon, we’ll see a tidal wave of retail and institutional capital come into this space.

And it’ll make early crypto investors rich beyond their dreams…

To make a fortune, all you have to do is take small positions, be patient, and let the momentum of this massive trend propel us to new highs. Know that this space will be volatile. But so long as you position-size properly, you’ll be able to stomach it.

So be rational and be ready – because your life is about to change in ways you can’t imagine.