Editor: Thanks for joining me today, Teeka. Last week, you held a major webinar about a rare phenomenon happening soon. And you believe it’ll boost the entire crypto market to new highs.

Over 25,000 people tuned in to this event. That’s more than the attendance of some Major League Baseball games…

Can you tell readers who didn’t tune in what this so-called “phenomenon” is?

Teeka: It all has to do with a specific line of code Satoshi Nakamoto programmed into the bitcoin blockchain—line 1578. I call it the “Money Line” because every time this line of code is triggered, regular investors have the chance to make millions of dollars from crypto.

NOTE: This exclusive replay link will expire in less than 48 hours.

Editor: Why is this line of code so important?

Teeka: Before I get to that, let me ask you a question. What happens to the value of something when its incoming supply decreases by 50%?

Editor: Well, if demand is constant, but the new supply is cut in half… then the price increases. It’s Economics 101.

Teeka: That’s right. So imagine if the supply of new gold being mined was suddenly cut by 50%…

Teeka: Exactly. And the same is true for bitcoin. This is what the “Money Line” does. It cuts the bitcoin mining reward in half—decreasing the amount of new bitcoin issued to the market by 50%.

And this sends bitcoin prices soaring… 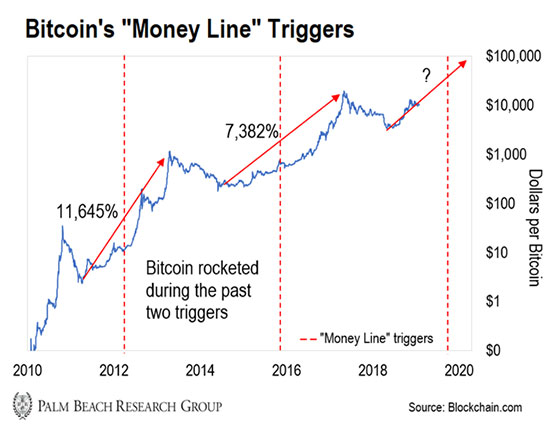 Editor: Now, how often does this happen?

Teeka: The “Money Line” is triggered every four years. And it doesn’t just boost bitcoin… the altcoin market goes crazy to the upside, too.

Editor: So you’re sayingall cryptos have gone up each time the “Money Line” has triggered?

Teeka: Yes. During the past triggers, everyday investors have had the chance to become millionaires from tiny investments like $500.

Of course, past success doesn’t guarantee future gains. But there are three other reasons why I believe the next “Money Line” boom will be bigger than the previous ones.

One is something I call “Entry of Liquidity.” It simply means bitcoin is becoming the gateway to the rest of the crypto market. We’re on the doorstep of seeing an ocean of liquidity flood to bitcoin.

This is money you can collect without ever investing in risky penny pot stocks.

Click here to discover how to collect your first check.

Editor: And where is this surge coming from?

Teeka: That brings me to my second reason: Wall Street. The largest financial institutions in the world are getting exposure to cryptos…

One example is Bakkt, which launched yesterday. It’s the crypto platform run by the owners of the New York Stock Exchange. It’ll allow fully compliant trading of bitcoin for institutions.

Nasdaq, the world’s second-largest stock exchange, is testing out a bitcoin trading product, too. And ErisX recently received regulatory approval to launch crypto futures. It’s backed by TD Ameritrade, one of the largest brokers in the U.S.

Editor: These are incredible developments, T. So what’s the third catalyst that’ll boost the crypto market?

Teeka: I call it altcoin season.

You see, when crypto emerges from a “brutal” bear market, bitcoin always rallies first. On average, bitcoin outperforms for about six months. After that, the rest of the market catches up.

So where bitcoin goes… eventually, the whole market goes. It’s like a magnet. This happens with gold, too. The price of gold moves before junior mining stocks do.

Editor: And how should readers play this?

Teeka: Start by buying some bitcoin first. Not only will it rise in price before the halving… you’ll also need some as dry powder to buy altcoins.

Look, right now, the price of not being in this trend is much greater than the price of acting. This setup won’t last forever.

So I urge everyone to get into bitcoin and crypto in general. And I recommend you do so quickly—because once the “Money Line” triggers again, it’ll be too late.

Editor: Thanks for your time, Teeka.

Editor’s Note: As Teeka mentioned, the “Money Line” is triggering again soon. This time, it’ll boost cryptos higher than ever before. And in his special crypto training session, he revealed the exact date of the next trigger—and how you could potentially turn as little as $500 into millions from it.

But if you missed it, don’t worry. Teeka’s sharing a special replay of his event right here. Don’t miss out on your chance to become a crypto millionaire.