Editor’s Note: There’s an event that occurs every four years that sends bitcoin prices rocketing higher. In today’s essay, Crypto Income Quarterly chief analyst Greg Wilson explains what it is—and how you can profit from it…

Like World Cup soccer, it only comes around every four years. But you can’t wait until it happens. You need to prepare months in advance.

Today, I’ll explain what this important event is.

And more importantly, while most people will tell you to wait until it unfolds, I’ll show why you want to position yourself well ahead of this money-making opportunity.

For the first time ever, Dr. Richard Smith, the founder and CEO of TradeStops, is hosting a “Bull vs. Bear Stock Summit” on February 13th, where he will reveal:

The “Halving” Will Cut Supply

It’s called the bitcoin “halving” event. Let me explain what that is…

There can never be more than 21 million bitcoins in existence. The issuance is strictly regulated by computer code.

Every 10 minutes, bitcoin “miners” compete with each other to solve a complex mathematical problem. Whoever solves the problem first is awarded 12.5 bitcoins.

A halving event is when the bitcoin reward gets cut in half. So each halving reduces supply coming to the market. The first halving occurred in 2012, and the second in 2016. The third will occur in 2020.

The halving will continue roughly every four years until all 21 million bitcoins are released. As I mentioned, the next halving is estimated to occur in May 2020—about 16 months away.

Why You Need to Position Yourself Early

Our research shows bitcoin prices reach their bottom about 472 days prior to the halving events. It also shows that once the halving occurs, you can expect the rally to continue… 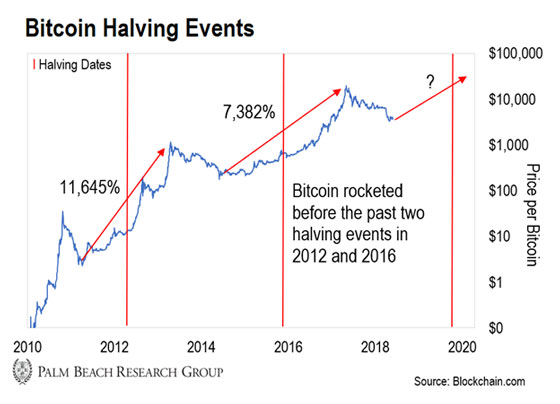 As you can see in the chart above, bitcoin bottomed roughly 15 to 16 months prior to each of the first two halving dates. But it rallied for a year or more after them.

That’s why you don’t want to wait until the halving date to buy bitcoin.

If you invested 15–16 months before the first halving, you would’ve made 28% more than waiting until the halving date…

And if you invested 15–16 months prior to the second halving, you would’ve made 158% more than waiting until the halving date.

And this next halving is coming at an incredible time, too. We’ll see reduced supply right before demand explodes.

MENSA considers him a genius!

You wouldn’t know this demand was coming simply by watching bitcoin’s price action. But beneath the surface, the groundwork is being laid.

The new company will offer trading, storing, and security of digital assets. And its goal is to make cryptocurrency more accessible to investors.

Another example is Bakkt. It’s the institutional-grade digital currency platform being operated by the owners of the New York Stock Exchange.

Then there’s ErisX. It’s a competitor to Bakkt being backed by industry heavyweights such as Cboe Global Markets, TD Ameritrade, and Nasdaq.

And don’t forget, there’s plenty going on internationally as well…

Germany’s Boerse Stuttgart—one of the top ten 10 largest exchanges in Europe—will launch a crypto trading exchange in the first half of 2019.

Japan’s Mizuho Financial Group plans to launch a digital currency to promote cashless payments. It has 60 domestic regional banks on board.

And CoinfloorEX, a division of the UK’s cryptocurrency exchange Coinfloor, is planning to offer physical bitcoin futures to Asian markets.

Take Advantage of This Window

As I showed you, investing far head of the halving window can lead to much bigger gains than waiting for the halving to occur. So now is the optimal time to buy.

Not only do we have the halving catalyst that will cut supply, but institutional greed will boost demand up to 15 times. When supply drops and demand rises, asset prices have only one direction to go: up.

The next leg up could see bitcoin surpass its old highs. Prepare today.

And always remember, bitcoin is volatile. So don’t bet the farm. You just need a tiny grubstake for the potential for life-changing gains.