It was supposed to change our lives…

In 2001, American entrepreneur Dean Kamen had the world abuzz. His new technology promised to save us time and make it easier for us to get around. It was even supposed to reshape cities and improve air quality.

Kamen wasn’t the only one who thought this technology would be transformative. Billionaire venture capitalist John Doerr said that Kamen’s invention might turn out to be “bigger than the Internet.”

Today, we know that despite the secrecy and hoopla surrounding it, Kamen’s invention – the Segway – turned out to be a complete flop. The two-wheeled personal-transport vehicle hit the market in 2001. It was heavy (weighing in at more than 100 pounds) and expensive, with early units selling for around $5,000. Worst of all, it wasn’t cool.

Kamen thought he might sell 10,000 units per week. Instead, the contraption sold just 30,000 over the next six years. It was one of the most overhyped technologies in history.

Today, there’s another technology that’s just as overhyped as the Segway…

Blockchain technology promises to eliminate financial intermediaries and revolutionize the global economy. Some proponents even believe that it will have more of an impact on our lives than the Internet. (Sounds familiar, right?)

If these claims sound hyperbolic to you, you aren’t alone… In fact, I believe blockchain technology is the most hyped technology since the Segway.

As you may know, bitcoin uses blockchain technology. But despite the over-the-top hype surrounding blockchain, I believe the prospects for bitcoin are brighter than ever.

I’ll explain all the details of this idea today. But before I get into that, let me explain the difference between bitcoin and blockchain…

For the last three years, I’ve attended an annual blockchain conference in Washington, D.C. I’ve listened to dozens of presentations and talked with computer programmers, entrepreneurs, regulators, and lawyers who are involved with this nascent technology.

And every year, I come away from the conference more certain that blockchain technology will fail to live up to the hype. That’s because a blockchain is just a database. The data within this database are grouped into “blocks,” which are “chained” together using cryptography – methods of encrypting and decrypting sensitive information.

A blockchain is a distributed or decentralized database, meaning identical copies of the blockchain are stored locally on many computers. When more blocks need to be added to the chain, the network verifies that the new data is valid and updates all the blockchains.

Maintaining a blockchain requires a computer network with a lot of processing power and memory. And since there are many copies of the same blockchain, it’s impractical to store a lot of data with this technology.

All of this makes a blockchain inefficient.

In my opinion, blockchain technology doesn’t have many viable uses. Most of the time, a centralized database controlled by a single party will do.

But blockchain does have one perfect application…

One party, or even multiple parties, can’t control what’s in a blockchain. The entire computer network must agree that new data is valid. That makes a blockchain highly secure and accurate. As a result, blockchain is perfect for keeping track of simple, peer-to-peer money transactions. And that’s exactly what it does for bitcoin.

Bitcoin’s claim to fame is that it allows for global, unrestricted value transfers without a middleman like a bank. And bitcoin’s blockchain – acting as a ledger – records all of these transfers.

Most modern money is in the form of currencies. Currencies are typically government-issued and widely accepted. Most currencies have relatively stable values, although some suffer from high rates of inflation.

But bitcoin isn’t issued or controlled by any government. And it’s still too volatile to be considered a true currency.

Instead, bitcoin is a “digital asset” whose price is determined by supply and demand…

Given bitcoin’s limited supply, its price is particularly sensitive to changes in demand. It tends to get bid up in a frenzy by speculators, then comes crashing down when those speculators rush to exit their positions. 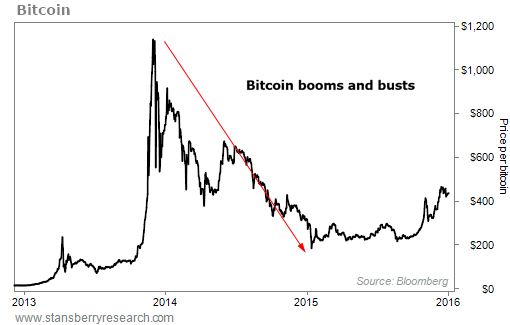 Bitcoin’s “boom and bust” pattern has repeated itself… In early 2017, bitcoin traded around $1,000. But it rose exponentially by the end of the year, reaching $19,500 last December.

It was a full-fledged crypto mania. There were even reports of some people taking out second mortgages to buy bitcoin. Of course, using leverage to buy such a volatile asset is a huge mistake. And to no one’s surprise, these reckless speculators got burned again.

Recently, bitcoin traded around $3,200. It’s fallen more than 80% from its peak less than a year ago… 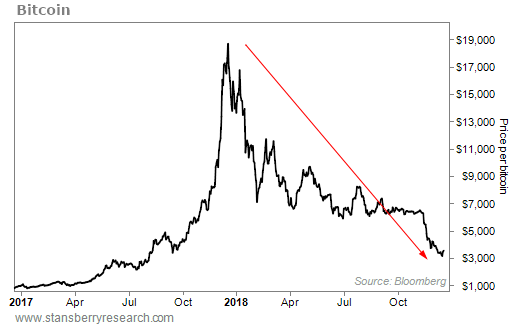 The good news is, we’re seeing signs that bitcoin’s decline may be nearing an end…

The Bitcoin Investment Trust (GBTC) is a closed-end fund (“CEF”) that holds bitcoin. You can buy shares of GBTC in your brokerage account, just like a stock.

CEFs can trade at a premium or a discount to their net asset value (“NAV”). (My colleague Doc Eifrig wrote a free primer on CEFs in the Stansberry Research Education Center right here.)

Late last year, when bitcoin prices were on a tear, GBTC traded at an absurd 100% premium to its NAV… 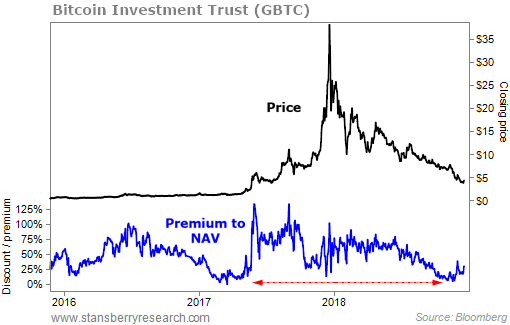 In other words, bitcoin was in such high demand that some investors were willing to effectively pay $39,000 per bitcoin just to have exposure in their brokerage accounts. That was a clear sign of a mania.

As the price of bitcoin has plummeted, GBTC’s premium has receded. In mid-November, GBTC traded at only a slight 5% premium – its narrowest level since early 2017.

This tells me that the speculative excesses have disappeared. The fear of missing out has turned into panic… And after its most recent 80%-plus decline, bitcoin’s risk-versus-reward prospects are the best they’ve been in nearly two years.

One of bitcoin’s biggest problems is its inability to scale. And that could be about to change.

Credit-card giant Visa (V) processes an average of 500 million transactions a day. By comparison, bitcoin has topped out at about 500,000 transactions per day.

Bitcoin’s blockchain can’t handle millions of transactions per day (after all, it’s an inefficient database), so programmers and enthusiasts have long debated how to scale it. And they seem to have found a solution…

It’s called the Lightning Network. Your bitcoin is routed via computers in the network (or “nodes”) until it reaches its virtual destination. But these transactions aren’t recorded on the blockchain unless a problem occurs.

The Lightning Network may allow bitcoin to scale so that it can eventually handle millions of transactions per day. As a result, bitcoin can become a better medium of exchange.

Of course, bitcoin isn’t going to replace the U.S. dollar, the British pound, or the Swiss franc. But that doesn’t mean it can’t coexist as an alternate form of money out of the government’s control.

And thanks to these developments, we could be near one of the best opportunities to buy bitcoin.

Its price will remain volatile… So if you decide to establish a position in bitcoin or GBTC, I recommend keeping your position size small. A 1%-2% position within a diversified portfolio is all that’s appropriate. (And, of course, don’t use leverage.)