Satoshi Nakamoto is the most unstoppable man in the world.

The Federal Trade Commission can’t fine him. The IRS can’t audit him, either…

In fact, the World Bank can’t sanction him. Interpol can’t even arrest him…

He lives beyond the reach of governments.

No one really knows his true identity. Some people claim to be him. Others say he doesn’t exist.

But it doesn’t matter…

You see, Satoshi Nakamoto represents something much greater than one man. He’s an icon for decentralized, pseudo-anonymous networking.

At over $573 billion, Facebook is the fifth-largest U.S. company by market cap. And with a net worth of $62.3 billion, CEO Mark Zuckerberg ranks eighth on Forbes’ Billionaires list.

Yet despite his massive resources, Zuckerberg is no match against the U.S. government.

Earlier this year, Facebook announced plans to launch its own crypto, Libra. As I’ve said before, Libra won’t be a “true” decentralized crypto. It’s merely a digital coin pegged to a basket of major currencies (like the dollar and euro).

But while bitcoin is still too volatile to use as a daily digital currency, Libra could pose a legitimate threat to the U.S. dollar.

Here’s what I wrote last week:

Facebook has a global userbase of nearly 2.4 billion people. Libra’s adoption would be almost immediate if it launched today. It would become the world’s most widely used currency overnight.

And imagine if Facebook negotiates with advertisers to give Libra users 5–10% discounts on all their products and services. How would governments or central banks compete with that?

They can’t—which is why they want to stop Facebook.

And we’re seeing that come to pass…

And President Trump took to Twitter, saying Libra “will have little standing or dependability.”

The Federal Reserve, French Finance Ministry, and Bank of England have also come out against it.

Now, we don’t know whether Libra will succeed as a product… The market should decide that. But if the feds have their way, it may never get the chance.

Last week, lawmakers proposed a bill to ban Big Tech firms from issuing their own digital currencies. According to Reuters, the “Keep Big Tech Out of Finance Act” could impose up to $1 million in daily fines.

But as hard as they may try, governments can’t shut down true cryptos like bitcoin…

Why You Can’t Kill Bitcoin

Whoever Satoshi Nakamoto is, he designed bitcoin to be a truly decentralized network. It doesn’t rely on one central point of control.

This model makes the blockchain much more secure than the internet. You see, data isn’t stored in one location. Instead, it’s distributed across an entire network—making information much harder to hack… 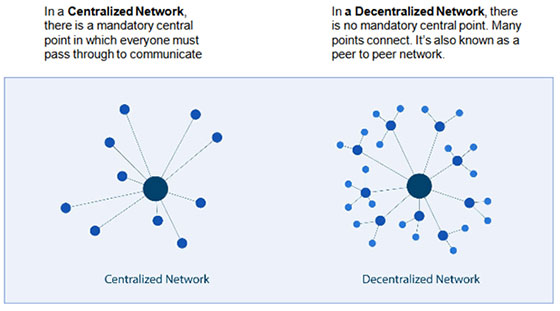 Without getting too much into the weeds, no individual person runs the bitcoin blockchain. It’s peer-to-peer, with no intermediary.

Each node (computer) in the network retains a copy of the blockchain ledger. And the bitcoin blockchain has thousands of nodes across the world. So to kill bitcoin, a government would have to shut down every single one.

Remember, these nodes are in scores of countries. It’d take a concerted international effort—costing billions of dollars in resources and manpower—to destroy bitcoin. And if even a single node survives, it can restart the whole shebang.

Unlike Facebook, there’s no bitcoin corporate office the feds can raid… no CEO to haul in front of Congress or into court… and no central point of command you can behead.

Even China—with one of the more repressive governments in the world—has tried to ban bitcoin. Yet trading still flourishes there. Russia, Vietnam, and Colombia have all tried and failed, too.

And don’t just take our word for it. Even U.S. Representative Patrick McHenry says bitcoin is impervious to government influence. Here’s what he told CNBC last week:

I think there’s no capacity to kill bitcoin. Even the Chinese, with their firewall and their extreme intervention in their society could not kill bitcoin.

The Enemy of My Enemy

Right now, crypto sentiment is negative because of the heat Libra’s taking. Investors fear lawmakers will push for sweeping regulations that’ll not only kill Libra—but stifle all cryptos, too.

But the bitcoin genie has been out of the bottle for years now. There’s no way to put it back in.

While Facebook and bitcoin aren’t necessarily aligned, it’s in Facebook’s best interest to lobby for a more accommodating crypto regulatory environment. In other words, the enemy of my enemy is my friend.

I expect Facebook to use its massive resources to influence global regulatory regimes. If it succeeds, it’ll be good for crypto. And even if regulators do kill Libra, it won’t really change anything.

Governments still don’t like crypto. Big whoop. We’ve been dealing with that for almost four years now—while adoption of digital assets continues to grow at a record pace.

Like all the other “end of the world” events, this will pass. Crypto prices will recover… and the worrywarts will look for something else to obsess over.

In the interim, just do what we always do: Be rational, build positions in great projects, and let time do the heavy lifting for us.

1 thought on “You Can’t Kill Bitcoin”