It’s a tall task to put a future value on bitcoin. Today I’ll show you Bitcoin’s Most Important Chart. It doesn’t come with a price forecast. But it does plot bitcoin’s future direction.

It’s a tall task to put a future value on bitcoin.

Ratios like price-to-earnings, price-to-sales, and price-to-cash flow are irrelevant. Unlike companies in the stock market, bitcoin doesn’t produce revenues, earnings, or cash flows.

Now, that doesn’t stop investors from trying to peg a future price. There are alternative methods – different than how we value traditional assets – to attempt to value bitcoin.

Today, I’ll show you a different chart. It doesn’t come with a price forecast. But it does plot bitcoin’s future direction.

A little more than a month ago, I traveled to Orlando for a Bitcoin & Blockchain Educational Class & Luncheon via a special invitation.

America’s #1 tech investor uncovers the breakthrough of the century…

For about two hours, these three renowned experts lectured a sold-out audience of 40 attendees. They covered everything from the history of money to blockchain basics to why bitcoin belongs in a diversified investment portfolio.

I learned several things at this event. But my greatest takeaway came from one chart. 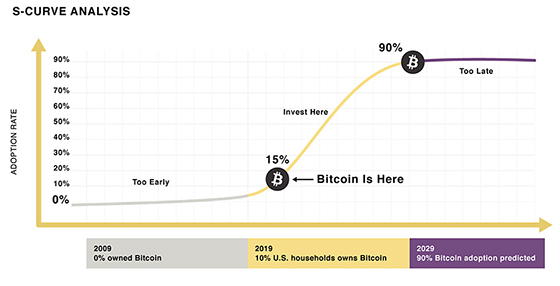 Source: Off the Chain Capital

You can see what I’m talking about in this second chart, which shows the S-curve for various other technologies…

New technologies, such as bitcoin, can be valued by the “network effect.” What this means is that adding new users to a network results in its exponential gains in value.

Think about computers. Apple invented the personal computer (PC) in 1977. In 1980, about one-tenth of 1% of households owned a PC.

Bitcoin is on the same path…

BUY THIS, NOT THAT:

The Best (and Worst) Stocks in America

Back in 2016, few believed bitcoin was a viable long-term investment. It was called a fad and a fraud, and some even dismissed it as a currency for criminals. But we knew they were off the mark.

At that same time, we were telling readers to get in early… that the naysayers were wrong and bitcoin adoption would explode. And we were right.

But by then, the biggest gains will be gone.

It’s Not Too Late

Time is the key variable in investing.

The S-curve is a proven method to know when to get on the train and when to get off. And the most significant gains on the S-curve are between 10% and 90% adoption.

Right now, bitcoin’s adoption rate is 15%. It’s still early in the cycle. You still have time to get on the train. 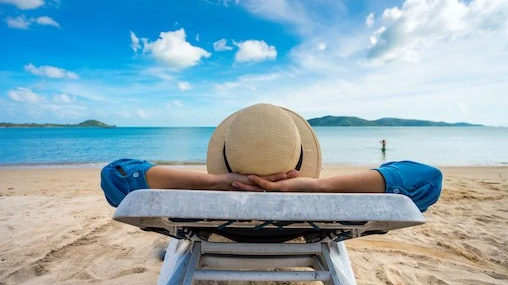 You’ve heard it all before…

Go to school. Get a decent job. Work hard for years. Buy and hold stocks.

That’s the HARD way to get rich.

Show me the EASY way!

That’s why it’s so important to get in at the early part of the S-Curve.

And getting in early is something Teeka told readers about way back in 2018:

Those who position themselves now before this onrush of new investors will be in place to make truly life-changing wealth.

Remember, bitcoin has a fixed supply. With fixed supply and increased demand, prices have nowhere to go but up.

But bitcoin’s price won’t go up forever. It will go up as the adoption cycle moves to 90%… And after that, it’ll be too late.

If you don’t own bitcoin, act now.

Be responsible and start with a small stake of 1–2%. Put it away for the long term. And wait for adoption to spike.

As I mentioned above, the S-curve method tells us bitcoin – and crypto – adoption will skyrocket over the coming months. And Teeka believes it’ll spark a once-in-a-lifetime opportunity…

Because of its underlying blockchain technology, he’s also convinced we’re about to see the biggest wealth and power shift in U.S. history.

According to Teeka, those who take the right steps now could fantastically grow their wealth… Those who don’t will be left behind.

He put together this new presentation to explain all the details…