He wanted to disrupt the traditional personal loan space through technology. So he turned to a groundbreaking tech called peer-to-peer (P2P) lending.

P2P lending allows individuals to both offer and receive loans from each other without an intermediary or middleman.

You see, Laplanche believed P2P lending would allow him to offer lower-cost loans than traditional banks… and make credit available to even more people.

On top of that, individual investors could lend money to their peers and generate income from the returns. It was a win-win situation.

The concept proved so popular, LendingClub – the company Laplanche founded – was one of the first apps ever launched by Facebook (in 2007). 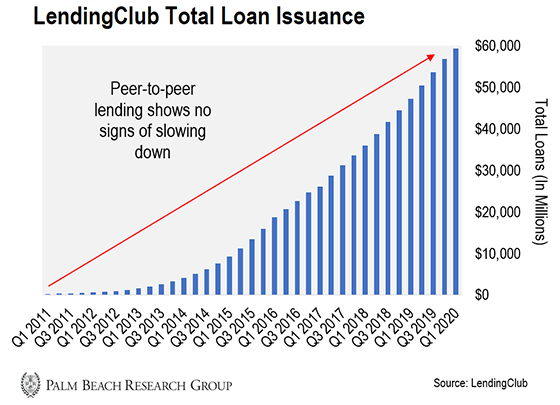 So if you want to make life-changing gains, you need to find early stage technologies poised to disrupt traditional business models.

And today, I’ll tell you about a technology on the cusp of disrupting the entire financial industry…

The Next Evolution in Crypto

I’m telling you about LendingClub because it illustrates the opportunity before us today: Decentralized finance (DeFi).

I know that’s a mouthful. That’s why we refer to it as “crypto finance.”

The idea behind crypto finance isn’t much different than P2P lending. The difference is it uses cutting-edge blockchain technology.

Transactions on the blockchain are faster… more secure… and less expensive than traditional networks.

Now, when someone mentions blockchain, you’re probably thinking it has something to do with bitcoin. But blockchain is much more than just bitcoin.

Sure, we’re still bullish on cryptos. They’re disrupting industries from healthcare to online gaming. And bitcoin is rapidly becoming a safe-haven asset.

To wit, bitcoin is up 98% since its March 12 lows. That’s even more than traditional safe havens like gold, which is up more than 8% over the same span.

But the opportunity in crypto finance is much, much bigger…

Take the Depository Trust & Clearing Corporation (DTCC), for instance. It’s a clearinghouse for nearly every type of trade you can imagine.

All in all, the DTCC settles more than 100 million trades per day. That comes to $1.5 quadrillion in global trades per year.

And here’s the thing…

So you can see how enormous this opportunity is.

But you may be wondering why people will turn to DeFi. Let me show you…

One speculation could turn $500 into an extraordinary tens of thousands in a matter of weeks. And it has nothing to do with shorting, buying puts, or timing the market. But this rare opportunity could be the last good chance to get in. What’s this investment?

Four Reasons DeFi Will Catch On

Based on my research, there are four major catalysts that will drive DeFi adoption:

According to the Cato Institute’s Center for Monetary and Financial Alternatives, this market could easily generate $100 trillion in financial assets over the next 50 years.

The good news is we’re in the early days of this megatrend – just like LendingClub before it went mainstream on Facebook in 2007.

But some of the wealthiest names on Wall Street and in Silicon Valley are starting to flock to this space.

So if you want to get involved in the growing crypto finance space – and beat the big-money rush – consider buying a small amount of the stablecoin USD Coin (USDC).

Stablecoins are cryptos with a fixed price. Most are pegged to the U.S. dollar and trade at or near $1. And they’re used by many DeFi apps.

Even if you’re not ready to take the plunge into DeFi yet, you can use USDC to get your feet wet. And remember, you don’t need to risk a lot to make life-changing gains with crypto.