By freezing pensions, GE hopes to reduce its retirement fund deficit by up to $8 billion. I say “hope” because there’s little chance it works.

That’s because the company has a big problem: declining interest rates. You see, bonds traditionally make up a large part of pension fund assets. And when rates go down, so does the income they generate.

To make matters worse, falling rates increase pension fund obligations. So even though GE is freezing pensions to save money, it’s basically just running in place… Come next year, its unfunded obligations will be even higher.

GE’s problem is symptomatic of private pensions in general.

Over the past 20 years, the percentage of Fortune 500 companies offering traditional pension plans has fallen from 59% to 16%, according to global advisory firm Willis Towers Watson.

Pension plan freezes have been on the rise, too. And historically low interest rates are the culprit. They’re forcing pension plans to invest more money outside of bonds.

But today, I’ll share why this pension crisis is a big opportunity for cryptos—and give you the easiest way to profit from it.

Pension funds have one goal: to provide retirement income to pensioners.

And for decades, they’ve done so by buying government bonds. Historically, bonds have provided safe and steady returns. But that’s no longer the case.

Interest rates now sit at historic lows. As you can see in the chart below, rates haven’t been this low in 60 years… 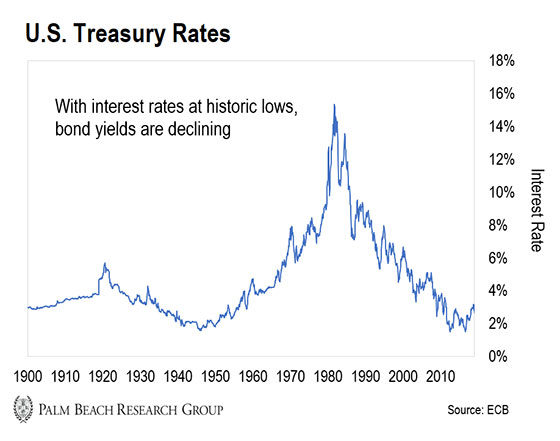 Negative yielding debt is piling, too. Nearly $17 trillion in global debt has negative yields—which is almost 30% of all investment-grade securities: 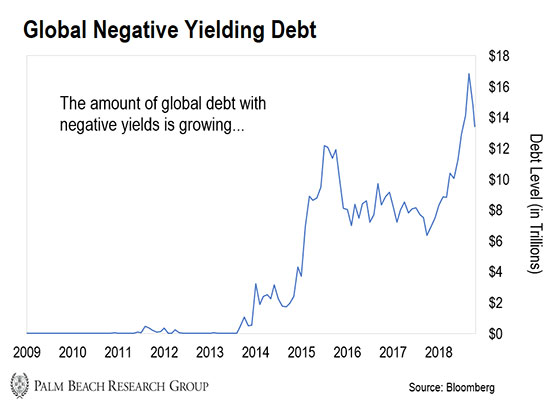 And when rates go negative, it means lenders are actually paying borrowers…

So pensions are looking elsewhere for yield.

“Because of low interest rates, we have to cast our nets far and wide to search for returns,” said Thijs Knapp, senior investment strategist at APG Asset Management.

APG administers a pension fund for government and education employees in the Netherlands. It has $518 billion in assets under management.

And it represents a huge opportunity.

And don’t forget, pension funds won’t be the only ones looking for income from alternative assets. Insurance companies, sovereign wealth funds, and high-net worth individuals all face the same problem.

So we know big money is moving into alternative assets—and that cryptos have the potential to capture part of those inflows. That’s because they can boost overall portfolio performance… Why Pension Funds Will Buy Cryptos

Pension funds invest for the long term. And they must structure their portfolios so they can always pay their current obligations.

That’s why they diversify over many asset classes. If their investments are too concentrated and go south, they could be in big trouble.

“One of the biggest benefits of alternative assets is the uncorrelated return to the market,” said Anne Valentine Andrews of BlackRock Alternative Investors.

It echoes what we first heard from Daily editor Teeka Tiwari in November 2018:

I’ve been saying for years that we’d see every major institution add bitcoin and crypto assets to its portfolio to smooth out volatility and increase risk-adjusted performance.

A recent study by Bitwise Asset Management concluded that allocating just 1–10% of your portfolio to bitcoin gives better risk-adjusted returns than just holding only stocks and bonds.

This is Wall Street’s “Holy Grail”—an uncorrelated asset that performs well under diverse market conditions… and can maintain its ability to rise at the same time.

As you can see, Wall Street is starting to wise up to Teeka’s advice.

What to Do Now

Pension funds have already started dipping their toes into the crypto space.

They’re the first U.S. pension funds to take the plunge into cryptos. And we believe this is just the beginning…

Like pension funds, you’ll generate long-term outperformance by adding cryptos to your portfolio. Plus, they’ll help you shield your portfolio—even during tough times.

If you’re new to crypto, we recommend you start with bitcoin.

The pension crisis isn’t the only catalyst that’ll send bitcoin to new highs. You see, there’s a rare event coming around the corner set to reduce new supply even more—and push prices higher.

It’s called the “halving” and it’ll cause the entire market to explode in value.

So now’s the time to get in. And to take advantage of this event, Teeka has found five tiny cryptos (some trading for as little as a few cents) that could soar so high, so rapidly… they could potentially help you turn $500 into $5 million in as little as 300 days.

It’s exactly what could’ve happened the last time bitcoin’s halving occurred four years ago. And he’ll show you how to get his exclusive buy list right here…

But don’t wait—this opportunity will go offline at midnight.