Bitcoin is down about 22% over the last month. And technical analysts fear the price could drop even lower.

You see, the news has generally been negative recently:

In moments like these, you should dig past the headlines to look at the fundamentals. So today, I’ll share what they’re showing—and why it’s still bullish for bitcoin…

Despite all of the negativity surrounding the crypto space, the fundamentals still look great. And the three charts below show why…

The first shows the number of wallet users on Blockchain.com, one of the most popular bitcoin wallet providers. As you can see, the numbers continue to grow… 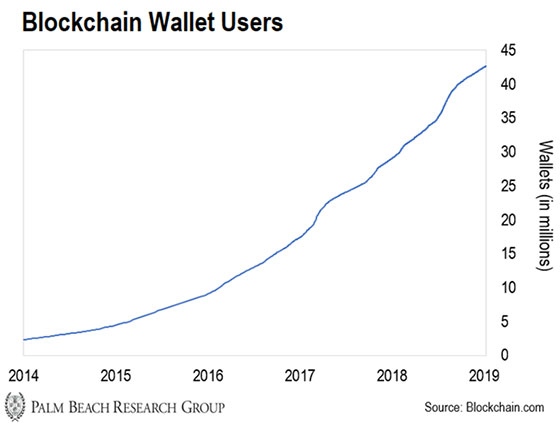 The second chart shows the number of daily transactions on the bitcoin blockchain. And since last year’s drop-off it’s trending higher again, too: 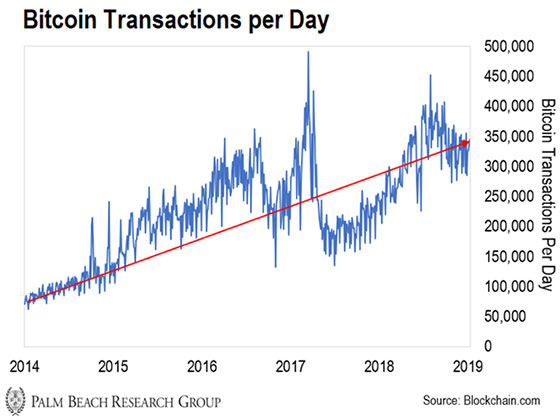 The last of the three charts shows bitcoin’s hash rate. It’s considered a good indicator of the bitcoin network’s overall health. And the higher the rate, the better the network is performing. 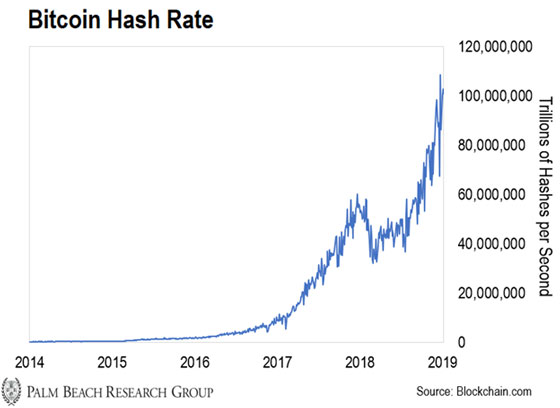 And these are just three metrics. We’re also seeing:

As Daily editor Teeka Tiwari said earlier this month, negative sentiment has caused some damage to bitcoin’s price. So don’t be surprised if it temporarily drops to the $7,000–7,500 level.

But in the long term, prices are going higher…

As I wrote in Thursday’s Daily, big money is already headed into the crypto space:

It represents a huge opportunity.

And pension funds aren’t the only ones looking for income from alternative assets. Insurance companies, sovereign wealth funds, and high-net worth individuals all face the same problem. 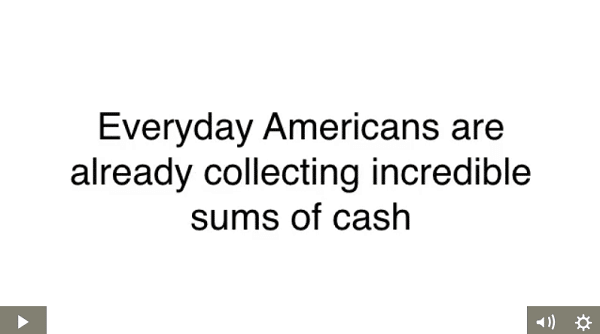 Teeka also pointed out that trading volume on the recently launched Bakkt platform is exploding—just as we expected.

Now, Bakkt is a subsidiary of the company that owns the New York Stock Exchange. It’s a bitcoin trading platform for institutional investors. And its daily volume was up over 800% recently.

This is a good proxy for institutional money coming into bitcoin. And we’re starting to see record amounts of capital flow into the platform—which will likely send bitcoin prices to new highs.

So if you’re worried about the recent pullback, just think about this: Even though bitcoin is down about 22% over the last month, it’s still up around 115% since January 1, making it one of the best-performing asset classes of 2019.

Just look past the negative headlines and focus on the fundamentals. And you’ll see the long-term outlook for bitcoin is bright.

It’s still not too late to buy bitcoin. But remember, you don’t need to bet the farm. A small stake is all you need to make life-changing gains.