Longtime readers will know all about my colleague Teeka Tiwari.

He’s one of the world’s most widely followed crypto investing experts. And he was the first guy in our industry to focus a major financial newsletter, Palm Beach Confidential, solely on crypto.

And Teeka’s top-performing open recommendation is a decentralized platform called Neo (NEO). He added it to the Palm Beach Confidential model portfolio in February 2017.

That would have turned every $1,000 grubstake into more than $100,000… and every $10,000 into more than $1 million. These are the transformative gains on offer in the crypto market. And as I (your editor, Chris Lowe) will show you today, it’s not too late to profit.

As Teeka predicted in May, a group of smaller, more speculative cryptos is outpacing bitcoin.

And if history is any judge, these lesser-known speculations could lead to gains of 12,000% (not a typo) or more from here.

Teeka made a big call on crypto in May.

That’s when the last bitcoin “halving” happened. It’s the preprogrammed halving of the supply of new bitcoin that enters the market. And it happens roughly every four years.

At the time, Teeka was pounding the table that halving bitcoin’s supply meant a surge was on the way. As he put it…

Bitcoin is the gateway to crypto. Think of it as the reserve currency of the crypto world. So if demand stays the same, but supply gets cut in half, what happens to the price? It goes up.

He predicted that crypto assets other than bitcoin – aka altcoins – would do even better.

But it’s nothing compared to what happened with altcoins. They went up 5.5 times more…

Almost on cue, three months later, altcoins are surging ahead of bitcoin.

It’s all in this next chart… 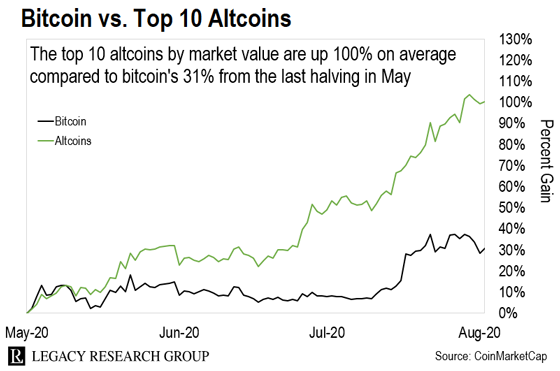 But the top 10 altcoins by market value did almost three times better.

That’s still not the 5.5x outperformance of altcoins we saw in the last crypto bull run in 2016-17. But it’s well on its way…

So don’t worry about this opportunity having passed already…

This next chart is one Teeka showed his readers in May.

It tracks bitcoin versus the top 10 altcoins after the previous halving, in July 2016. 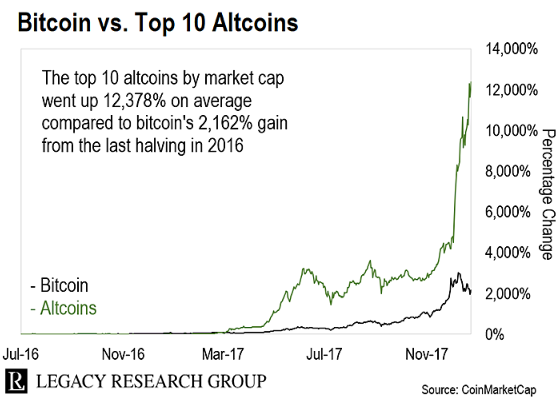 And as Teeka has been showing folks in a new video he’s put together, the opportunity ahead in altcoins could be even bigger.

That’s because the tech behind all cryptos – blockchain – is about to spark an American economic renaissance.

I can’t go into all the details here, but you can hear about it directly from Teeka. Check it out for free here if you haven’t already.