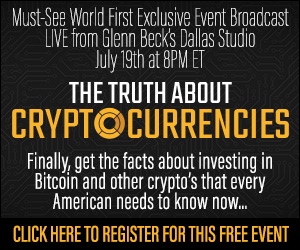 Over the last few days, I’ve shown you the growing trend of institutional investors jumping into cryptocurrencies.

Today, my lead analyst and right-hand man Greg Wilson shares the latest evidence of this imminent rush of capital… and the best way for you to act on it…

Meanwhile: July 19 is quickly approaching. That’s when Glenn Beck and I will sit down for our exclusive event: The Great Cryptocurrency Conspiracy of 2018.

Glenn and I will pull back the curtain on ALL of the lies and misinformation being spread by the bankers on Bitcoin and cryptocurrencies.

I’ll also be giving away 3 FREE cryptocurrency recommendations. And you’ll get your chance to claim your share of our $2 million Bitcoin Giveaway. Stay tuned…

“Soon, the risk of NOT being involved will outweigh the risk of having a small allocation.”

That’s the conclusion reached by Dan Morehead, the CEO and co-chief investment officer of Pantera Capital.

The comment came from his latest monthly letter, and it was in reference to institutional investors and cryptocurrencies.

Its portfolio includes notable names in the cryptocurrency/blockchain space such as Bitcoin, Ethereum, Abra, ShapeShift, and many others.

It’s a well-respected firm in the industry. Crunchbase ranks Pantera in the top 25 out of thousands of venture capital firms.

So when Dan talks, it pays to listen. And my ears perked up when he started talking about institutions and cryptocurrencies.

It’s a theme we’ve been talking about since late 2017.

Today, I’ll share more thoughts from Dan and further proof of institutional involvement—and I’ll tell you what it means for your portfolio.

We’ve been writing about the new Wall Street narrative on cryptos since December 2017.

In February, JPMorgan released a report that some are calling the “Bitcoin Bible.” The report came to some startling conclusions—notably, that cryptocurrencies “are unlikely to disappear.”

And in March, two of the country’s largest asset managers—BlackRock and Wellington Management—announced that they were getting into the crypto act.

You see, as we mentioned in the last installment, Wall Street has a history of developing “narratives.” And following them can be profitable…

We envision Wall Street’s pitch will be just that—by allocating 5–10% of your portfolio to Bitcoin and other cryptocurrencies, you can actually bring down volatility and improve returns.

That’s when we’ll see trillions of dollars of institutional money come into this space from players like JPMorgan, BlackRock, Wellington, and others…

And that narrative is growing louder.

The Latest Voice Added to a Growing Story…

The perceived risk-reward relationship is rapidly shifting towards institutional involvement.

According to Dan, Pantera is already having third and fourth conversations with large institutional investors. Each conversation is one step closer to an actual investment.

The Evidence Is Mounting

Dan isn’t the only one talking about institutions and cryptocurrencies. I attended the TokenFest conference in San Francisco earlier this year and heard similar comments.

TokenFest featured thought leaders from the entire cryptocurrency space. CEOs, venture capitalists, and developers were all in attendance.

Asked about institutions and cryptocurrencies, he said:

Banks are just waiting to pour money in. When the regulation happens, all the institutional money will pour in.

When asked about institutions and cryptocurrencies, he said:

Real institutional money is coming in, like Yale Endowment, who is seriously looking into crypto.

That’s big news. Yale Endowment manages over $27 billion. And it’s considered a pacesetter among other endowments—meaning that when Yale makes a move, the others generally follow.

How to Profit From the Institutions

Generally, Wall Street is always in position to get into new trends before the public.

But we’re in a unique situation. Institutions are mostly on the sidelines as the infrastructure is developed and regulations get figured out.

That means you have the opportunity to get into cryptocurrencies before the new Wall Street narrative takes hold.

It’s a great asymmetric trade setup. With just a small investment, you can make life-changing gains.

Like Dan said, the risk now is NOT owning cryptos. Buying Bitcoin is a great place to start.

If you haven’t signed up for the FREE training webinar Glenn Beck and Teeka are hosting on July 19, where he’ll be sharing the names of three cryptocurrencies you should buy immediately. They’re calling it: The Great Cryptocurrency Conspiracy of 2018. And they’ll be giving away $2 million worth of Bitcoin.