Bitcoin has smashed through the $20,000 mark… Why the rally is just getting started…

By Chris Lowe – The Daily Cut

That’s how much one bitcoin (BTC) trades for as I (Chris Lowe) type. 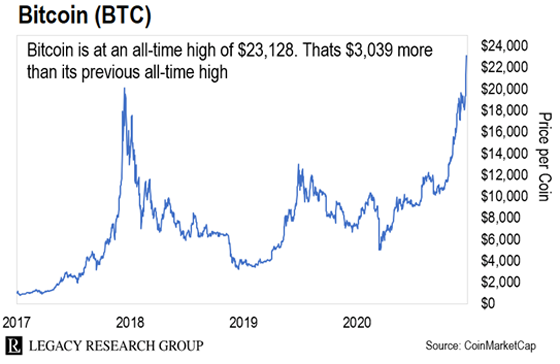 So if you’re one of our readers who took our advice and bought some bitcoin, congratulations.

And if you still haven’t picked up even some small exposure to this rally, as you’ll see today, it’s not too late.

We’re still in the early innings of a rally that could take bitcoin to $60,000… and beyond.

Bitcoin is up 5,304% since Teeka’s initial recommendation. That’s enough to turn a $10,000 investment into more than half a million dollars.

Teeka isn’t the only Legacy analyst who’s bullish on bitcoin.

In November 2017, Jeff Brown recommended bitcoin to paid-up readers of our flagship tech-investing advisory, The Near Future Report.

And in June 2018, Nick Giambruno recommended bitcoin over at The Casey Report and Crisis Investing.

Based on their research, I’ve urged you to buy bitcoin 93 times since we created The Daily Cut in August 2018 as a premium e-letter for all paid-up Legacy Research subscribers.

It hasn’t been a straight shot higher

With so much bullish sentiment on the crypto right now… it’s easy to forget how hated it was only nine months ago.

That’s a drop of more than 50% in less than one month.

But Teeka didn’t lose the faith…

On March 10, he forecast in these pages that we were “on the doorstep of another crypto boom.”

I hope you acted on this advice. Since its low for the year, bitcoin is up 463%.

And here’s the crucial thing to understand: We’re still at the beginning of a rally that will take bitcoin way higher.

Teeka calls it a “critical juncture” for crypto

It’s one of the themes he touched on in the December issue of The Palm Beach Letter. Teeka…

History suggests we’re now at a critical juncture for bitcoin, other cryptos, and the blockchain technology that underpins them.

Essentially, we’re now moving from the early-adopter phase to the mass-adoption phase.

Remember, with breakthrough technologies, mass adoption is the biggest driver of prices.

That’s why I’m telling you there’s still plenty of upside ahead.

Today, just 15% of American adults own some form of crypto. The other 85% own no crypto. So there’s still a lot of market share left for the taking…

S-curve analysis backs this up…

The S-curve tracks how long it takes for folks to embrace a breakthrough technology. Think microwaves, cell phones, the internet… or bitcoin.

Take a look at this chart Teeka showed his readers. It’s by way of crypto investment fund Off the Chain Capital.

What you see is that the time it takes for 10% of the population to embrace a new technology is roughly the same as it takes to go from 10% adoption to 90% adoption. Teeka again…

If cryptos and the blockchain technology they’re built on follow the same S-curve pattern, and I believe they will, we could see an exponential increase in adoption rates over the next decade. That means the gains we’ve seen thus far in crypto are only the beginning.

Past trends suggest the biggest gains are typically made right after the early-adopter phase ends… which is exactly where we are today.

Cryptos such as bitcoin are limited in supply. So you can imagine what will happen when the number of buyers explodes higher.

There has been no shortage of new buyers in 2020

It’s been the year that big-money investors have warmed to bitcoin.

This has been a huge theme for Teeka all year. He said 2020 would be the year Wall Street greed propelled professional money managers to get on board with bitcoin.

That’s on just the institutional side. Consumers are also gaining easier access to bitcoin.

Take the big news out of PayPal

Online payments processor PayPal (PYPL) will allow its 346 million users to buy, hold, and sell crypto. The company will add crypto to its PayPal and Venmo apps next year.

Even Visa (V) is getting in on the act. This year, we saw announcements of a bunch of bitcoin-related credit and debit cards that will work with Visa.

Coinbase, the largest U.S. crypto exchange, will offer a Visa credit card that allows folks to spend crypto in their Coinbase accounts.

And BlockFi, another crypto exchange, will offer a Visa card that gives 1.5% cash back in bitcoin on purchases.

Visa isn’t shy about touting the benefits of crypto for its customers. This is from a blog post on the Visa website from July…

We believe that digital currencies have the potential to extend the value of digital payments to a greater number of people and places. As such, we want to help shape and support the role they play in the future of money.

With all this going on, it’s easy to see why Teeka is so excited about bitcoin and other crypto assets in 2021.

If adoption drives prices… and the biggest mainstream payments networks are getting on board… along with the great and the good of Wall Street… next year promises to be a stellar one for bitcoin holders.

What to do about it

If you bought bitcoin on the recommendations from Teeka, Jeff, or Nick… congratulations.

It’s one thing to subscribe to a newsletter. It’s another to act on the recommendations it makes in its model portfolio.

If you’re still on the sidelines, you’ve missed out on some big returns. But don’t despair. As the S-curve chart shows, we’re still in the early days of crypto adoption. And the rally in bitcoin is still in its early innings.

In October, Teeka predicted in these pages that mass adoption will take bitcoin to $60,000 sooner than most folks think.

And that’s not the end point. Brian Estes, an analyst for Off the Chain Capital, the crypto fund who put that S-chart together, says it could hit $100,000 by the end of next year.

Tom Fitzpatrick, an analyst at Citibank, has a price target of $318,000 for this time next year.

So if you haven’t acted on our long-running campaign to spur you into action… now is the time to buy before prices go into the stratosphere.

Just remember to limit your investment to a reasonable amount. Bitcoin is still highly speculative. So it has roller-coaster-like volatility.

In the mailbag: “I’m glad I put my trust in Teeka”

If you’re not already following Teeka’s research and ideas, you’re missing out.

He’s one of the world’s most widely followed crypto investing experts.

And he was the first guy in our industry to focus a major financial newsletter, Palm Beach Confidential, solely on crypto.

But bitcoin isn’t Teeka’s top-performing open recommendation. That title goes to a decentralized platform called Neo (NEO). He added it to the Palm Beach Confidential model portfolio in February 2017.

Small wonder Teeka’s readers flood our mailbags with praise. Here’s just some of what they’ve sent in…

I’m new, and I must say, I’ve never seen anything like these gains. Most have doubled my small initial investments in less than a month. I’m so thankful and grateful for finding Teeka and Palm Beach Letter. My life will forever be changed for the better with the new information and knowledge I’ve gained.

Teeka, you are a real sincere man. You do things for the little guy from your heart. I am very fortunate to have signed up for a lifetime subscription when I did. You see, I did make some money, but I also got to know you over the years and recognize how genuinely you act for your subscribers.

Not many people like you in the world. Let our love and appreciation always come to you!

Thank you for the great recommendations. My son is severely disabled, and money is always a little tight. Over the past few years, I’ve made some crypto purchases, and I’m thrilled with the results so far.

I really appreciate the reassuring notes you leave for us subscribers and the guidance you’ve provided. You’ve helped me get onto a path that will help me build a nest egg and make sure my son’s financial future is secure. That’s no small thing when it comes to disabilities. Again, thank you!

I just wanted to forward a very big thank you to Teeka for his exceptional guidance on cryptocurrencies. At the coin prices of today, my entire crypto holdings are up around 200% since March. We are obliterating the performance of traditional financial assets.

I’m glad I put my trust in Teeka, and I look forward to what is coming next! With the impact of COVID-19 and our lunatic central banks, this is truly a lifeline for me.

Just a short note to Teeka Tiwari… back in November of last year, I followed one of your crypto recommendations. You gave it away for free. I didn’t spend a nickel. You said that if I would invest $500, it could lead to MUCH more. I invested $800. That $800 is now worth $6,975. Just a huge thank you. I guess I need to join your subscribers!

Has Teeka’s advice changed your life for the better, like it has for these readers?